My last chart is a kind of a colorful
one. This is a satellite photograph of
the Ural Mountains, and it is labeled
the Yamantau region in Russia. And
this facility is ordinarily spoken of as
Yamantau Mountain because it is in a
mountain, and you can see from the
figure down in the lower right there, it
is about 600 miles almost due east of
Moscow in the Ural Mountains.
Beginning with Brezhnev, in about
1980, the Soviets, and now the Russians, have a closed city there. In our
liaison with the Russian Duma, we
have become fairly friendly with a
number of those Duma members, our
counterparts there, and we asked them
about closed cities. And they say, oh,
yes, we have closed cities. When you
draw a map of the region, the city is
not even on the map. It is closed. People don’t go there unless they are needed to work there, and they do not leave
there unless they are no longer needed
there.
Mezhgorye is the closed city. It happens to be in two little pockets in the
mountains, because one valley wasn’t
big enough to house it, but there were
at one time 60,000 people that we could
estimate from our satellite living
there. That would be about 20,000 workers that were working on Yamantau
Mountain.
Yamantau Mountain is the largest
nuclear secure facility in the world. We
have had two defectors from that
Yamantau Mountain. They each have
told us what they know. What we know from what they told
us is that it is enormously large, as
large as inside our beltway; it has train
tracks running in two directions, so
they intend to move a lot of material;
and it has enormous rooms carved out
of soft rock beneath hard rock. It is an
ideal geologic formation for producing
this kind of a facility.
The number of people at Mezhgorye,
since they are finished digging, has
now shrunk to about 15,000, as our satellites indicate, which means there are
about 5,000 working at Yamantau
Mountain.
What are they doing there? By the
way, this is so secret in Russia that the
cost of this, which has to be enormous,
does not show in the financial lines of
any of the ministries. It is the equivalent of our black programs, for those of
you who are familiar with black programs.
To give you some idea how important
this is to the Russians, continuing
work on Yamantau Mountain is more
important than paying their military
officers, because they have continued
work there when they couldn’t pay
their military officers. It is more important to them than the $200 million
for the service module on the International Space Station. That was embarrassing to them when they couldn’t
fund that and we had to fund the service module, which was their responsibility, on the International Space Station.
Now, there is no conceivable use of
Yamantau Mountain except during or
after a nuclear war. This kind of gives
you a little opportunity to get into the
heads of the Russian leaders. From
their writings and from their actions,
it is quite justified to draw the conclusion that they believe that nuclear war
is inevitable and winnable.
Now, I have no idea, and I have had a
number of classified briefings, I have
no idea what they plan to do in
Yamantau Mountain. But one thing is
certain, it has no use except during or
after a nuclear war.
I wanted to end with this, Mr. Speaker, to bring the message that nuclear
war is not unthinkable and therefore it
will not happen, because apparently
the Russians do not believe that it is
unthinkable.
By the way, they span 11 time zones.
Their enormous country goes almost
halfway around the world. They have
less than half the people that we have
and a geography that size, I think only
six cities of more than 1 million people.
And if wealth is determined by natural
resources and raw materials, Russia is
the wealthiest country on the globe.
They have everything their heart could
desire, except a rational government,
their heart could desire for a robust
economic system. They could close the
door and with their resources live happily ever after.
Almost nobody else can do that. We
cannot do that. We import about twothirds of our oil, we have no diamonds,
nickel, chromium, tungsten. You would
not have these lights in the ceiling
without importing things.
So I just wanted to end, Mr. Speaker,
with this chart which shows that our
potential enemies believe that there
could be a nuclear war and they are
preparing for it by spending money on
Yamantau Mountain, scarce money.
They were doing this, by the way,
when money was scarce. It is not
scarce now. They are awash in cash because oil is $65, $70, $75 a barrel. But
they were spending money on this before they were flush with money.
So my hope is, and I believe we
should have time, that the American
people in our society and in our military can plan, adapt, design, build, so
that we will be immune.
We are much more likely to have this
attack if we are vulnerable to the attack, and at the moment we are explicitly vulnerable. We don’t need to be
that way. The creativity and ingenuity
of the American people can make us essentially immune to this, Mr. Speaker,
and we need to be about it. 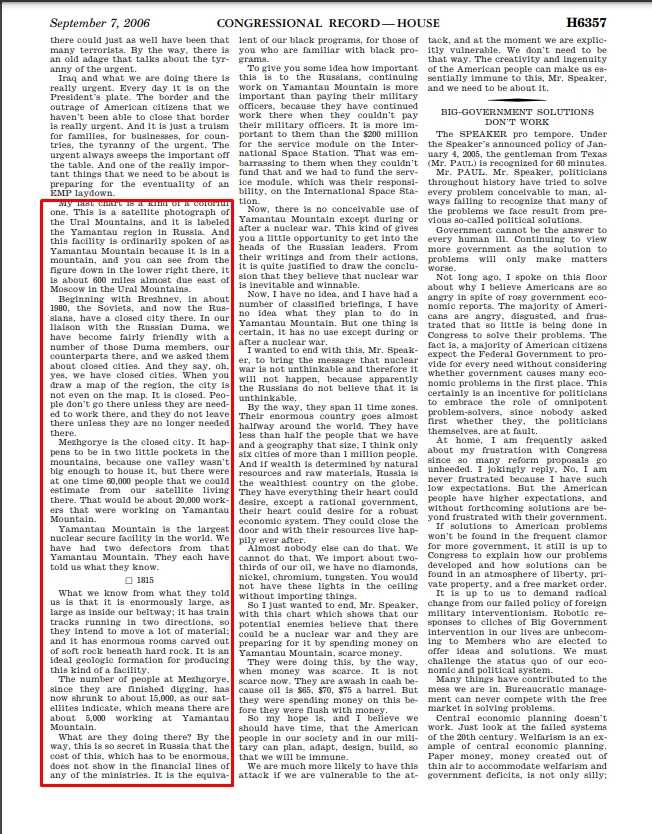